BAB, Inc. has announced that on Saturday, June 30,2018, My Favorite Muffin bakery-cafés nationwide will celebrate the anniversary of the brand’s 1988 launch as a national franchise.

The proprietary cake-like muffin formula created over thirty years ago continues to set My Favorite Muffin apart from competitive bakery concepts. The muffins are made from proprietary batter formulations from which literally hundreds of varieties can be created. In front of large display cases featuring up to 18 different daily varieties of six-ounce “Jumbo” muffins and 8 more varieties of “Mini’s,” customers look at the vast assortment, trying to decide among options such as Blueberry and Cinnamon Crumb for the traditionalist or more decadent creations like Cherry Cheesecake and Boston Cream Pie. The majority of locations also offer freshly baked bagels with BAB’s exclusive cream cheese spreads, hand-crafted breakfast and lunch sandwiches, and coffee beverages under BAB’s own brand of Brewster’s® coffee, which is roasted exclusively for the Company’s franchisees and licensees. 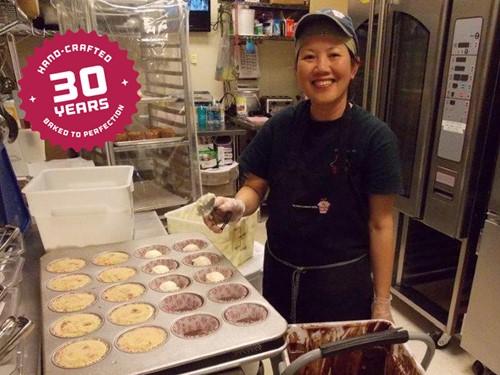 My Favorite Muffin will show its appreciation to its customers with thirty-cent promotional offers that will vary per location and are being offered exclusively through its new mobile loyalty “app.” The offers will be available only on June 30, 2018. Prior to the event, customers can download the app in order to take advantage of the anniversary offers and other loyalty offers to come in the future.

Thirty years after its inception, My Favorite Muffin has steadily improved on its strong foundation. The Company is committed to maintaining the standard of excellence it has set forth over the years, while simultaneously looking for ways to build upon it in order to meet and exceed the expectations of its customers.

BAB, Inc. franchises and licenses Big Apple Bagels®, My Favorite Muffin®, and Brewster’s® coffee under its subsidiary, BAB Systems, Inc. The company’s stock is traded on the OTCQB under the symbol BABB and its websites can be visited at www.babcorp.com and www.bigapplebagels.com.

Join our team & own your future